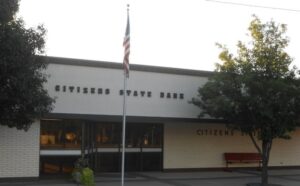 Serving The Community and Surrounding Community Since 1884

Started as a Private Bank
The Citizens State Bank of Cheney, Kansas was established in 1884 as the Citizens Bank with A.W. Sweet as President and A.E. Sweet as Cashier.
The Bank commenced business as a private bank and had no Directors and the entire Capitol Stock was owned by A.W. Sweet and A.E. Sweet partners. There was no State Banking Department in Kansas at that time which explains why the bank did not carry the name STATE Bank. The bank did business in a frame building about the middle of the principal block on the west side of Main Street. 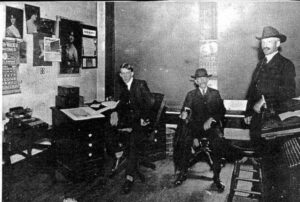 This photograph shows the bank when it was located in a frame building in the middle of the block on the west side of Main Street. Shown from left to right, E.E. Sweet, Odon Northcut and A.E. Sweet.

January 1905, C.Q. Chandler of Wichita and F.E. Carr family of Wellington bought the majority of the Sweet’s stock. The Bank and the I.O.O.F. lodge then built the two story building at the corner of First and Main in Cheney, KS. The Bank occupying the first story and the lodge using the second story. 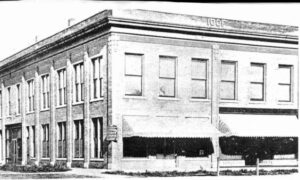 In March 1905, Citizens Bank bought the corner lot on which Kimel’s Meat Market stood. The Bank was downstairs and I.O.O.F. Lodge upstairs. Bank moved into the building November 10, 1905.

The Citizens Bank then became a State Bank and was known as the Citizens State Bank, it having come under the supervision of the State Bank Department. 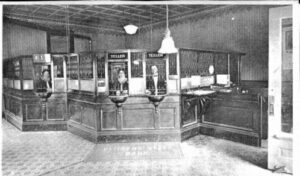 With bank totals tripled, with more activity and with more services offered it has been found necessary to obtain more space than is available at the old banking location, so a new bank building was constructed one block north and across the street. 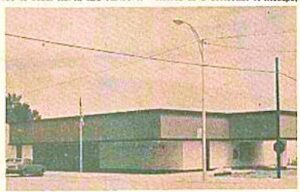 New Home of The Citizens State Bank of Cheney, KS which has many new features on the inside and outside. Thirteen full time employees, drive-up, double the first-floor space they had at the old location, and a full basement. They anticipated that the added space will take care of their needs for the next 25-40 years.

Forty years later Citizens State Bank is still growing.  The inside lobby and a few offices were remodeled (First quarter of 2013) which updated the bank after serving the community and surrounding areas for 129 years. 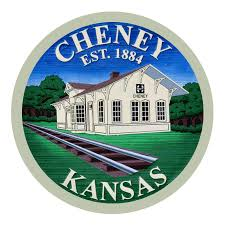 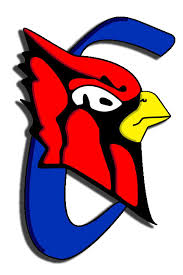 United Way of the Plains 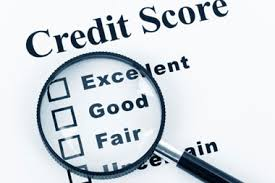 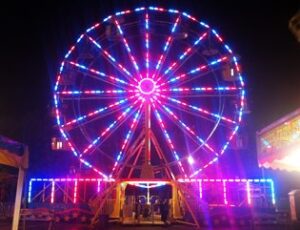 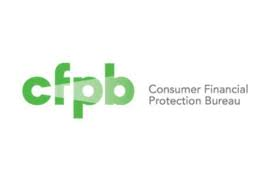